The aim of the project is to establish a scientific web corpus of medieval mural painting in Slovenia titled Corpus picturarum muralium medii aevi. Since a representative corpus of medieval mural painting for one entire country does not yet exist, and the Slovenian space is geographically manageable, the project group wishes to create a model corpus. Its future aim is to become thematically connected to the emerging corpuses in other countries and a part of a global, thematically interconnected all-European database of medieval mural painting. For this reason, its name is in Latin. The necessity of its making is demonstrated by numerous new findings in Slovenia as well as in the neighbouring countries that were part of a joint political and cultural territory in the Middle Ages. Furthermore, it is demonstrated by insufficient research of this area in the existing literature and in the continued progress in the research in wider European space.
In the scope of the project, a corpus of mural paintings in Slovenia until around 1380 will be created. Later, it will be upgraded with paintings until 1500. The corpus will include initial studies, thematic maps, glossary of technical terms, and according to individual locations, the following topics: historical data, building development, state of research with bibliography, technical drawing of the murals, written and visual sources, the level of preservation, description, stylistic analysis, iconographic analysis, analysis of the entire iconographic and iconological programme, dating, authorship, patronage, circumstances of the commission, subject matter and execution specificities, technical analysis, restoration works, reception, and wider social and political analysis in the context of researching medieval art in the 20th century. Thus, the corpus will be comprised of numerous aspects of researching medieval mural paintings.
The project group consists of specialists for medieval iconography, stylistic development, social and political and patronage context, technical laboratory analyses of medieval paintings, exhibition policy, discovery, exhibition and reinterpretation of mural paintings in the 20th century, of specialists for architectural drawings of the paintings’ schemes etc. Owing to highly systematic and transparent goals, the work program is clearly structured. A special value of the proposal is that the group enjoys full support of relevant consultants from Slovenia as well as from an international advisory board of some of the most prominent European referential researchers in the field.
The results of the project will be numerous since such an in-depth analysis, which will greatly exceed all existing ones, will bring about several new attributions, datations, reveal new connections, and new iconographic interpretations and findings connected to patronage. Moreover, the research will include a technical analysis of the paintings, while special attention will be placed on aspects that have not yet been addressed and will be offered by reception analysis.
Since almost all members of the project group lecture at universities in Slovenia and abroad, a regular transferal of knowledge from the project to the universities will be fully ensured. A comprehensively designed corpus will open new possibilities for researching medieval art in Slovenia as well as in wider European space.

International advisory committee, consisting of leading experts in medieval mural painting research from Slovenia and abroad:
-    the member of the Slovenian Academy of Science and Arts Professor DDr Janez Höfler,
-    Assistant Professor Dr Janez Balažic from the University of Maribor,
-    Dr Joanne Dyer from the British Museum London,
-    Assistant Professor Dr Cristina Guarnieri from the University of Padua,
-    Professor Dr Andrea de Marchi from the University of Florence,
-    Professor Dr Manfred Koller from the Academy of Fine Arts in Dresden and the former head of the restoration department of the Federal Monuments Office in Vienna,
-    Dr Zsombor Jékely from the Museum of Applied Arts in Budapest who attained his doctorate at the Yale University,
-    Alberto Felici from Opificio delle Pietre Dure in Florence,
-    Monica Galeotti from Opificio delle Pietre Dure in Florence. 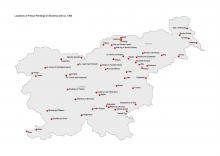 The work in the context of the basic research project over the course of three years will be divided into six semi-annual periods. During all of the stages, the researchers will do the following:

Additionally, the following activities will be carried out during the individual stages:

STAGE 2: March 2021 – August 2021
-    examination of the first ten locations and preparation for the publication of the results in the online corpus – realized
-    technical analysis of the samples of medieval mural paintings in suitable laboratories – realized

STAGE 3: September 2021 – February 2022
-    examination of another ten locations and preparation for the publication of the results in the online corpus – in process
-    technical analysis of the samples of medieval mural paintings in suitable laboratories – in process
-    internal workshop with the presentation of interim results and participation of the international advisory committee.

STAGE 4: March 2022 – August 2022
-    examination of another ten locations and publication of the results in the online corpus;
-    organisation and realisation of a large international conference in Ljubljana on medieval mural painting, the creation of medieval artistic heritage corpora, and various aspects of medieval art analysis with an international discussion about the establishment of a joint international database Corpus picturarum muralium medii aevi;
-    technical analysis of the samples of medieval mural paintings in suitable laboratories.

STAGE 5: September 2022 – February 2023
-    examination of another ten locations and publication of the results in the online corpus;
-    technical analysis of the samples of medieval mural paintings in suitable laboratories.

STAGE 6: March 2023 – August 2023
-    examination of yet another ten locations and publication of the results in the online corpus;
-    final internal workshop of the project group;
-    publication of a scientific monograph as a result of the international conference.