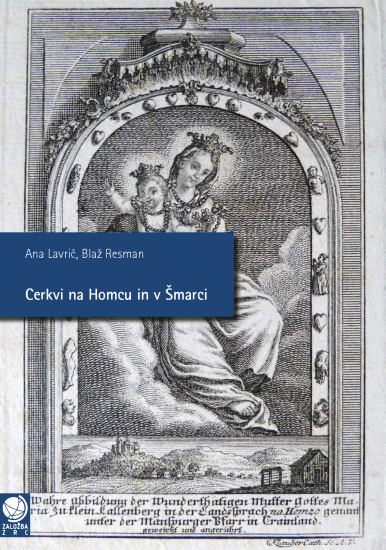 
Of the Gothic church which was erected at Homec after the miraculous apparition of the Blessed Virgin in 1419 only the lower part of the free-standing bell-tower has been preserved up to this day; in the times of Turkish incursions around 1500 it was adapted to serve as a defence tower as well. Since the condition of the old church had worsened and the building had also become too small, a new sanctuary was built on its northern side in 1723, and the next year the church was pulled down and a new nave was begun on its site; the building was completed in 1728.

It was built after the plan by a yet unidentified architect who followed closely the example of the church of the Teutonic Knights in Ljubljana: the central body is a dome-vaulted nave, covered by a tent-shaped roof, on the ground plan of a square with cut corners, opening with semi-circular arches into the secondary space units, i.e. the entrance bay with the organ loft, the sanctuary, and two shallow side-chapels. While the entire interior articulation is also copied from that in the Teutonic Knights' church, the facade followed the example of the Holy Trinity Church in Vrhnika, a prototype of Slovenian pilgrimage architecture of the 17th century. The building underwent no major alterations until the earthquake of 1895. Due to the resulting severe damage it seemed necessary at first to pull down the entire church, but it was saved and restored after the plans by architect Raimund Jeblinger of Linz. The belfry got a neo-Gothic top storey and a high pyramidal roof instead of the bell-and-onion-shaped old one. The two open pilgrims' galleries by the facade were walled up and turned into a baptistery and a staircase to the organ loft. The main alteration, however, was made to the nave vault: the old four-bay dome could reportedly not have been saved and was therefore replaced by an eight-bay one, over the shorter sides of the nave supported by overhanging lunette-shaped wall prolongations. The reinforced concrete shell of the new dome is much thinner and lighter than the original stone one was, and by reclining it on the inserted lunettes the architect prevented it from pushing the damaged side walls apart. Regretfully, along with the original dome one of the main artistic qualities of the Homec church was destroyed, the frescoes by Franc Jelovšek from 1726–28, for which the present late-Nazarene decoration by Matija Koželj (sanctuary 1905, nave 1912–14) is but a very modest compensation.

The marble high altar was made in the workshop of stonemason Luka Mislej of Ljubljana; it was completed in 1728. It is special due to the double altar-niche: the inner niche was originally occupied by the old miraculous image of the Blessed Virgin, either a painting or the surviving relief of the Mother of Mercy from ca. 1665; this was covered by a larger painting of the Virgin with pilgrims in the landscape with the Homec church, a work by Valentin Metzinger. In the late 18th century or at the beginning of the 19th century a new image of the Virgin for the inner niche was painted by Leopold Layer as a reduction of the Metzinger painting. Layer's painting remains in the retable, whereas Metzinger's was removed from the church and disappeared during the Second World War. The present side altars of the Holy Trinity and St. John of Nepomuk were made in 1874 by Janez Janežič, who preserved most parts of their predecessors. The original retables, each comprising two paintings by Metzinger, were replaced around 1780 by retables in Baroque-Classicist forms after the (preserved) design by Leopold Layer, who kept the upper Metzinger's paintings (Sts. John and Paul, Family of St. Anne) and painted the titular images anew, probably as faithful copies of the former ones. The altars were made by the Kranj sculptor Valentin Vrbnik (the four surviving side-statues have been partly remodelled and differently placed). Also the pulpit was made by Vrbnik, likewise after the preserved design by Layer.

The Church of St. Maurice at Šmarca was, between 1876 and its promotion to a parish in 1980, the sole succursal church of the Homec parish. The settlement was first mentioned in 1343 and as it was named after the patron saint, the church must have been somewhat older. The patrocinium of St. Maurice, extremely rare in Slovenia, could probably be linked with the noble family of Andechs who owned the precious relic of the saint's head and stimulated his worship; the centre of their landed property in Slovenia was in the nearby Kamnik. A Romanesque nucleus is presumably contained in the nave, concealed by later reconstructions of which the most decisive was that of 1884, when the master builder Janez Gregorc gave the building a neo-Romanesque image. The Šmarca bell-tower and the church originally stood apart, but as the nave was later twice prolonged the tower now makes part of it.

Besides the main altar from 1884, made by Franc Osole and complemented with statues by Jurij Tavčar, side altars of St. Valentin and St. Joseph stood in the church till 1982; they were made in the 19th century in the Baroque tradition, but some of their statues (partly preserved) date back to the 17th century. The former altarpiece of St. Maurice from 1830, signed M. L., shows the patron saint over two confronted armies as an echo of the battle between the Austrians and the French near Homec in 1813. A merciful image of Our Lady of Good Counsel from the second half of the 18th century is preserved in the church, and sources give note of the image of Our Lady of the Blood, a copy of the miraculous image in the Church of St. Maurice in Re, Piedmont. The images of the Way of the Cross are the most valuable items in the Šmarca church; painted by Leopold Layer for the church of Homec, they were replaced in 1907 with worthless reliefs from Tyrol and sold to the said succursal church.