Digitization of Jewish Heritage of Slovenia 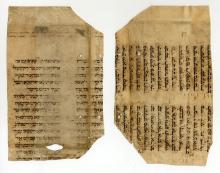 The aim of the Slovenian-Israeli bilateral project "Digitization of the Jewish Heritage in Slovenia" is to document and digitize preserved Jewish material and associated immaterial heritage in Slovenia and its inclusion in the Bezalel Narkiss Index of Jewish Art, the largest online depositary of Jewish art and visual culture in the world, accessible to anyone. In the scope of this project, which is in the domain of digital humanities, a special "Slovene" module of the Jewish Heritage Index will be created, which will represent the basic archival, field and comparative research of Jewish heritage in Slovenia.

The project is based on the latest methodological principles and documentation and digitization methods adopted by the Center for Jewish Art (Hebrew University of Jerusalem, Israel) in its nearly 40 years of existence. However, for the needs of the project, this methodology is slightly adapted to suit the challenges of the Slovenian space, which is specific in the context of particular historical circumstances. This concerns, in particular, the documentation and digitization of medieval Jewish quarters and major monuments that no longer exist, or their image, form, and content have been changed. We will upgrade the documentation by including 3D visualizations of selected Jewish monuments.

The key advantage of the project is the cooperation and mutual exchange of expertise between the Slovene and Israeli sides, since in many segments an unilateral implementation of the project would be difficult, owing to professional and linguistic specifics of the project. The joint work comprises field documentation of Slovenian Jewish heritage according to the methodology of the Center for Jewish Art, a joint seminar, an international conference in Israel on the topic of Jewish heritage in Slovenia, and the production of descriptions, as well as the transmission of the data and metadata collected in the Index of Jewish Art. This will enable Slovenian researchers to conceptualize local Jewish heritage on a global scale, while the Israeli researchers will be able to deepen their understanding of local material and adapt the methodology to the specifics of the Slovenian territory.